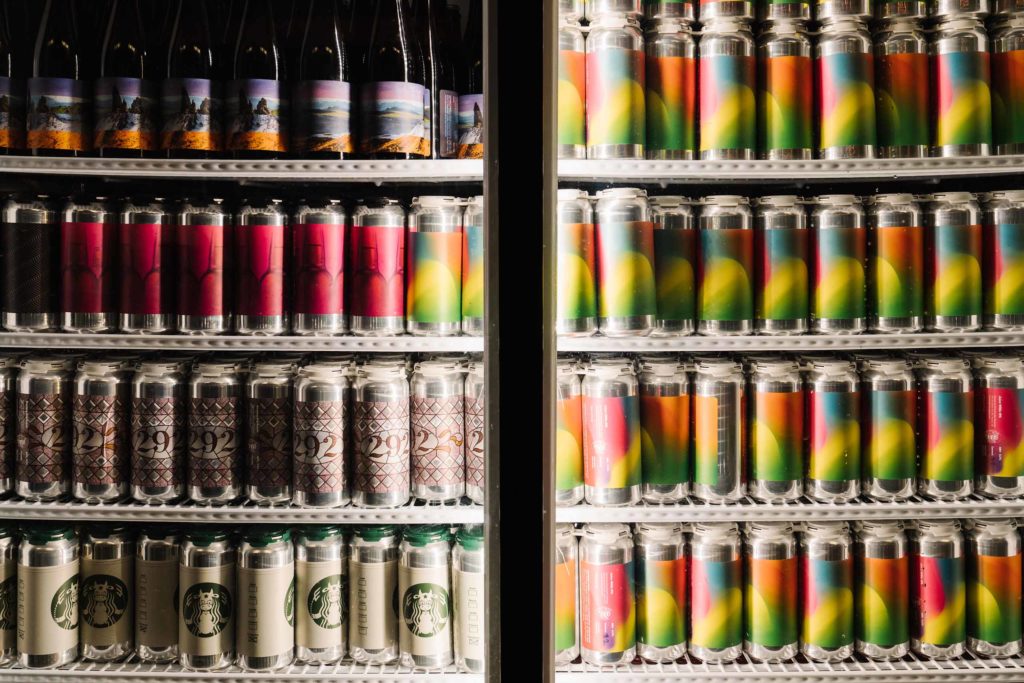 Out of respect for our staff, local community, and public health we will be pausing dining room service. We will be prioritizing sanitation and support of our community through curbside pick-up. We are offering the freshest beer in town, wine and fresh local chef prepared food and provisions. We are currently offering curbside food five days a week, Tuesday - Saturday 4 to 8 PM. Please call-ahead with you food orders, so, we can minimize your wait. Come anytime after 1pm Wednesday - Saturday for beer and provisions as well.  Keep an eye on our Facebook, Instagram and website as we will update the menu daily. If there is something you would like to see on the menu let us know.

Rendez-MOO Hazelnut Chocolate Milk Stout
Our milk stout conditioned on fresh vanilla, cinnamon, and cocoa nibs is like having dessert in a glass without being too over-the-top. Brewed with a blend of Maris Otter, multiple specialty malts, and lactose sugar imparts aromas of milk chocolate and dark toffee. (Allergy Warning: This beer contains lactose.) Tap Date 3/6 OG 1.066 IBU 30 ABV 5.9%
First of May Maibock
Dance for the arrival of Spring. Breath deep the green. Hear the buzzing of bees. Celebrate the end of death, greet life with open arms! Maibock is a beer for celebration and renewal. Have a sip, or a hearty draught, let its warm bready malt notes revive you. Delight in its floral and vinous hop tones. Drink and enjoy. Prost! Tap Date 5/1 OG 1.069, IBU 29, ABV 7.5%
Tampa Timeshare Grapefruit Basil Gose
Our house gose, soured with yogurt then salted with a blend of sea salts we've perfected with our friends over at Beautiful Briny Sea in Grant Park. The beer was then dosed with Thai and sweet basil, fermented on grapefruit juice and pulp, and aged on grapefruit zest. Tap Date 4/17 OG 1.044 IBU 5 ABV 4.5%
Dr. Fünke’s Sour Pale Ale
Feeling blue? Brighten your spirits with the latest batch of our Sour Pale Ale! We used Galaxy, Citra, and Mosaic hops this go-around, so expect strong tropical fruit flavors to compliment this beer's lightly-soured finish. Tap Date 6/19 OG 1.055 ABV 5.9%
Technological Ripeness IIPA v5.0
Version 5.0 focuses on a heavy use of Australian Enigma, Galaxy & Simcoe hops. Notes of resin, white wine & hints of raspberry are prevalent. As the beer warms, it becomes more tropical with notes of mango and papaya. 8% ABV
BASTRD Vivant Pilsner
Brewed as a collaboration with our long-time friend Tim Schiavone, this version is a slight riff on our classic Vivant. Featuring Weyermann Pilsner and Munich malts and Tradition and Hallertau Blanc hops straight from the Seitz hop farm in Bavaria's Hallertau region.Tap Date 4/23 OG 1.049 ABV 5.6%
Coffee Bovine Justice Imperial Milk Stout
Our Bourbon barrel aged Imperial Milk Stout that's rested on coffee beans. 10% ABV
Just the Tip of the Cap English Mild
There are 11 different grains and sugars in this beer, giving it the similar complexity of a Barleywine grain bill, but it only clocks in at 3.4% ABV. Very faint nuances of dark fruit, caramel, toffee, chocolate, and coffee, with just enough earthy English hops for balance; get the flavor and drink more than one. Tap Date 12/26 OG 1.035 IBU 14 ABV 3.4%
Blue Ridge Pale Ale
Homage, definition: Special honor or respect shown publicly. Blue Ridge Pale Ale is a celebration of the classic West Coast Pale Ale, amber gold in color, with a balanced malt and hop profile. This beer is full bodied, complex, with a crisp clean finish. Notes of ruby red grapefruit, citrus zest, coriander, and light toasted biscuit. Featured hops, Cascade and Amarillo. And yes, they already called about the can. Tap Date 6/5 OG 1.053 IBU 41 ABV 5.5%
Bean Talk Brown Ale
A smooth American brown ale base with notes of caramel, toasted bread, and milk chocolate lays the canvas for conditioning on coffee beans. Our friends at Dark Matter Coffee in Chicago provided us with Few Rye barrel-aged coffee beans for this project. The coffee has notes of dark chocolate, cocoa, vanilla, and a balanced barrel presence which blend beautifully with the base beer. Tap Date 2/16 OG 1.055 IBU 25 ABV 5.4%
Le Papillon Witbier
Papillon, the French word for butterfly. Our Witbier is a light-bodied, Belgian wheat beer made with un-malted wheat, oats, and barley, to which we have added orange peel, coriander, and chamomile; the spicing regiment provides notes of bright citrus & gentle spice. Tap Date 5/2 OG 1.047 IBU 15 ABV 4.9%
Juice Willis: Armegeddon IPA
Our 9th Anniversary edition hopped with Centennial, Ekuanot, and Galaxy hops. Tap Date 6/20 OG 1.062 IBU 60 ABV 6.5%
Berry White Extra Bass Berliner Weisse
This "Imperial Berliner Weisse" was blended with almost 200 pounds of raspberry, strawberry, and blueberry puree creating a "not quite over the top" fruited sour. And, even at close to 7.0% ABV, the smoothness is rivaled only by Barry White himself. Tap Date 6/19 OG 1.058 ABV 6.9%
Willett Bourbon Barrel Aged Wee Heavy Scotch Ale
Aged nine months in a Willett bourbon barrel to round out all of the flavors. Great for accompanying rich foods or desserts, or to keep you warm while wearing that kilt! ABV 8.5%
Victor IPA
Named after the original property owner, Victor Kriegshaber, this is a West coast style IPA with big hop flavor and smooth bitterness. We have added over three pounds per barrel of Columbus, Amarillo, and Simcoe hops. Flavors of juicy citrus, grapefruit, pine, and resin. This is a balanced, bitter, and highly aromatic IPA. Tap Date 10/25 OG 1.062 IBU 80 ABV 7.0%
Breaking Bob Kolsch
Our 2nd generation, this pale golden ale/lager hybrid associated with the city of Köln, Germany, uses the lightest German Koln & Heidelberg malts. With enough hops for balance, the result is a very light, crisp beer. Tap Date 8/30 OG 1.045 IBU 21 ABV 4.8%
Juice Willis: What Just Hoppened IPA
Having trouble getting your latest film done in time so it can premier at the Cannes Film Festival? This batch features Sabro, Amarillo, and Motueka hops for a citrusy tropical fruit explosion that might even win you the coveted Palme d'Or. Just remember to shave your beard and everything will be fine. Tap Date 6/9 OG 1.062 IBU 60 ABV 6.5%
O.G. English Bitter
English Bitter is often overlooked as a style in modern craft beer circles. As such, we decided to brew one as it is a quintessential session beer. Light amber in color, ours has a unique balance of caramel and toasty malt, esters reminiscent of orchard fruit, and a firm hop bitterness. Being true to style, we are serving this beer at a lower level of carbonation to make it as quaffable as possible Tap Date 5/18 OG 1.039 IBU 35 ABV 3.9%

Terry Koval has spent the last several years turning the Wrecking Bar’s menu into a diverse array of flavors, while staying rooted in pub classics. We source from local bakeries, dairies, and farms ( including our own ), and believe it’s important to support the local economy and build relationships. The menu keeps a few classics on constantly, while the rest changes to reflect the season, highlighting produce and flavors at their peak.

Housed in a late Victorian building that was once a home, a church, a dance studio, and an architectural salvage store, the Wrecking Bar Brewpub has worked to become a cornerstone of the neighborhood. With a focus on comfortable atmosphere, clean and exciting locally sourced food, an extensive bar program, and excellent beer crafted in house, the goal is to maintain a restaurant that has has something for everyone. Come grab a beer at the bar, or meet up with family and friends for dinner. 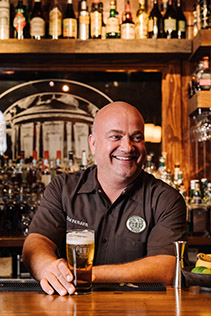 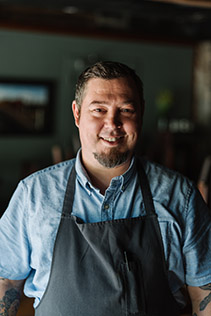 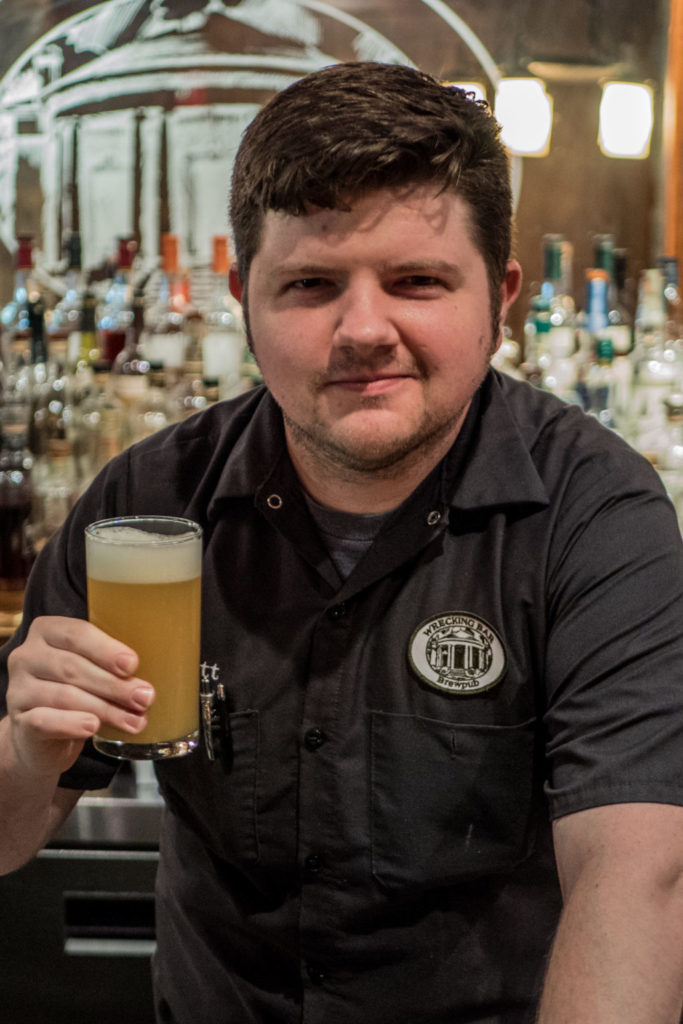 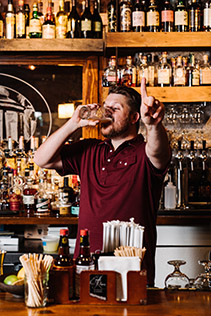 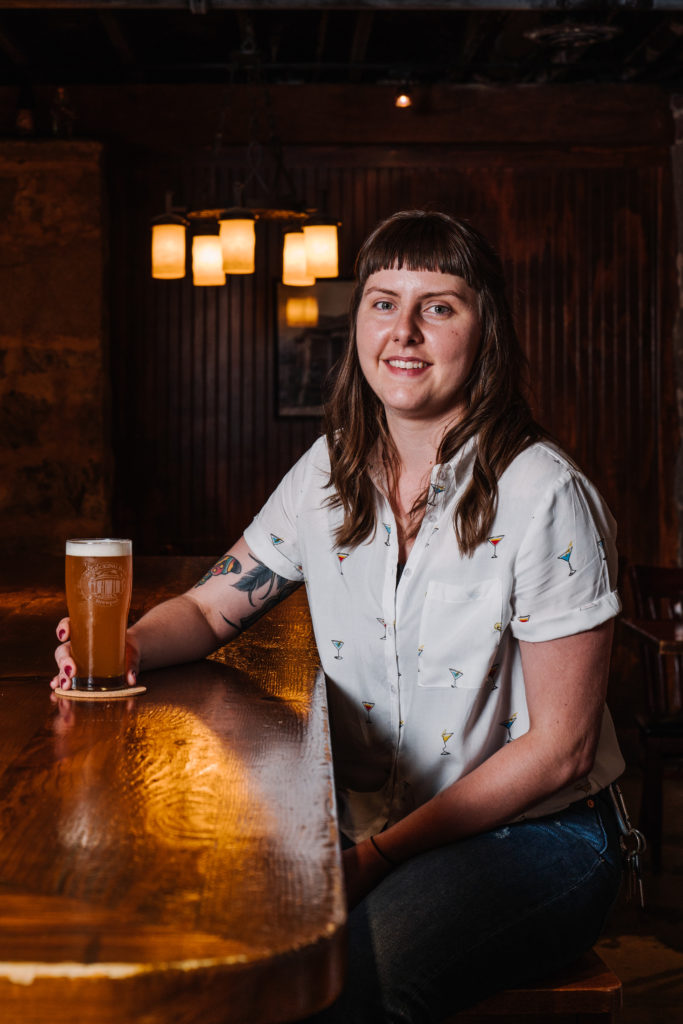 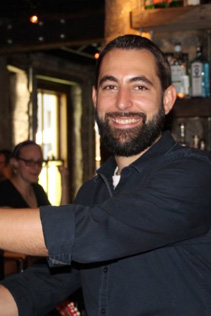 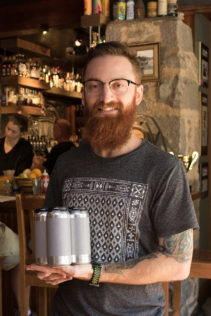 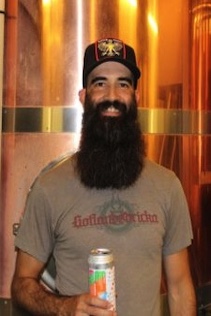 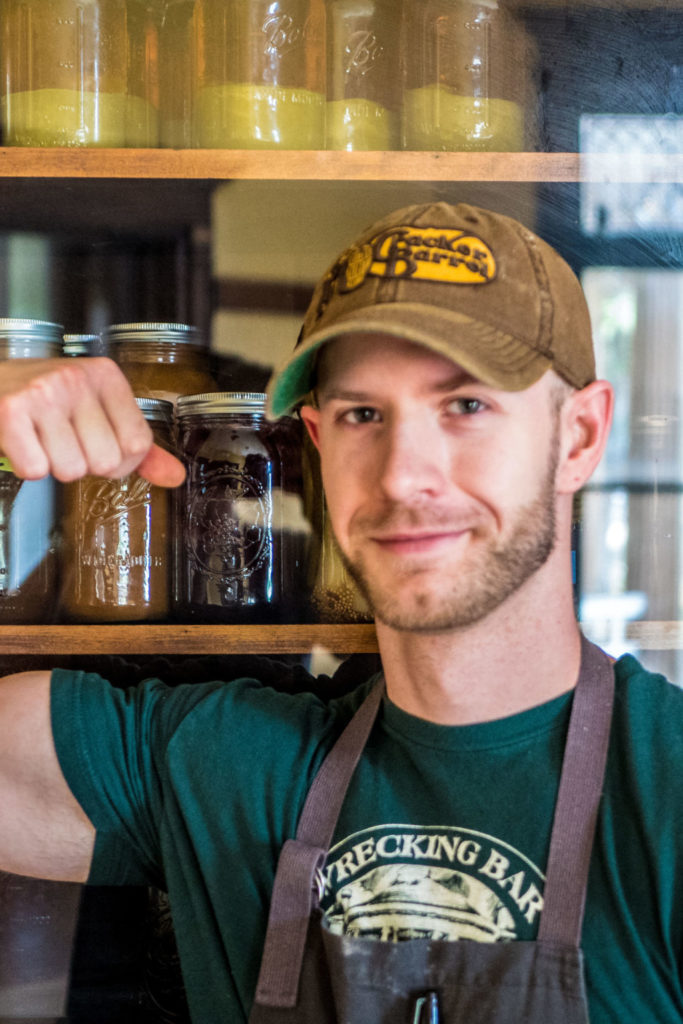 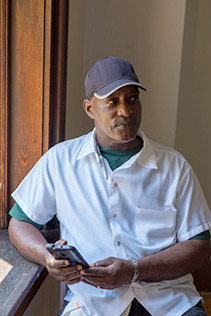 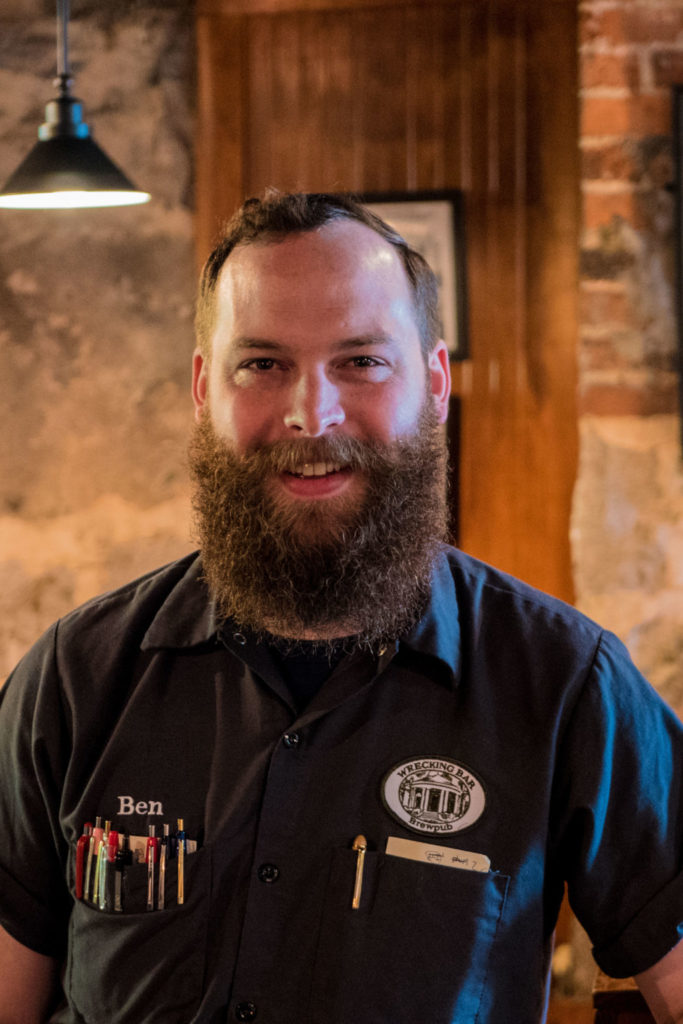 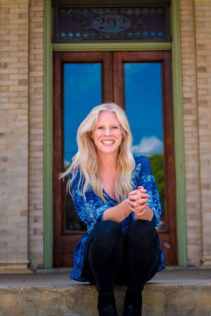 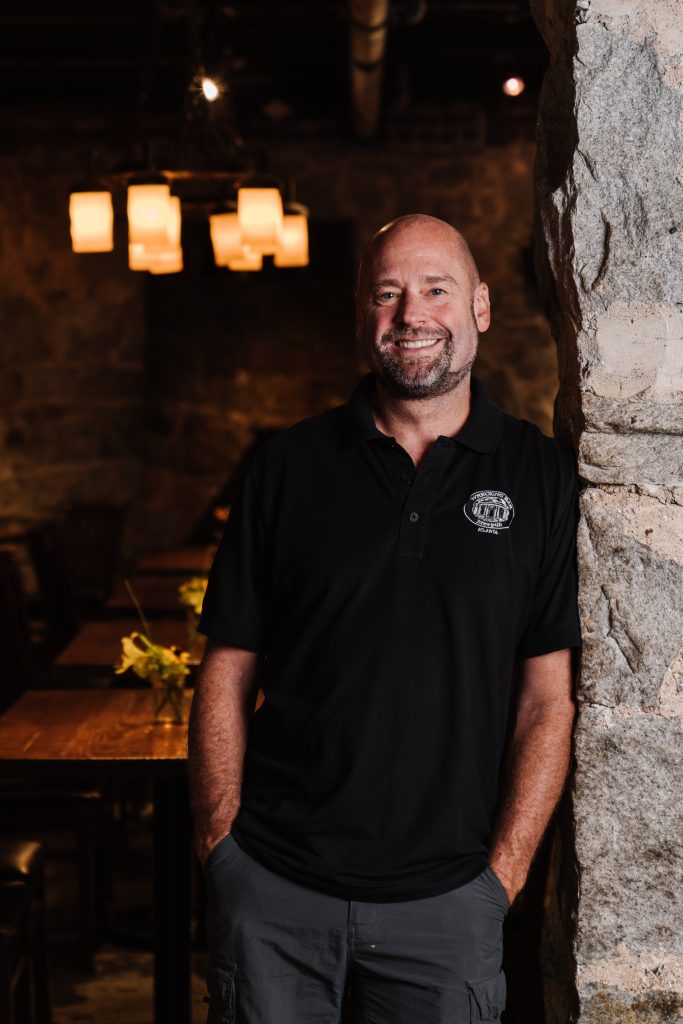 There are three separate event spaces at the Wrecking Bar Brewpub, each with varying capacity and atmosphere:

The Cellar is a private dining room located inside the restaurant that seats up to 30 for dinner and holds up to 40 for a cocktail style party. Excellent for dinner parties and get togethers, from workplace mixers and book clubs, to birthday parties and rehearsal dinners.

The Biergarten is an event space in our brewery warehouse that seats up to 42 and holds up to 100 standing. With a long concrete bar, twelve beer taps, and fermentation tanks in the room, it’s definitely a casual venue, and a built-in stage makes it perfect for celebrations involving a band.

The Marianna is our formal event space on the main floor of the house, with a capacity of 30-250 people. It has 13 foot ceilings, stained glass windows, and original fireplaces, and is perfect for weddings (both ceremony and reception), breakout sessions, rehearsal dinners, and holiday parties.

“The Victor H. Kriegshaber House is historically significant for its association with Victor Hugo Kriegshaber, who was a leader in the cultural and economic development of Atlanta during the first third of the century, and the original owner of this house. He commissioned the building to be designed by architect Willis F. Danny just before 1900 and lived there with his family until 1924.The Kriegshaber residence is a fine example of Denny’s work; he practiced only a few years in Atlanta before his early death at 31 due to pneumonia, but managed to design many of the city’s most prestigious public and private structures before 1905. Stylistically, the house is a noteworthy transitional statement combining late Victorian and eclectic details.

Kriegshaber was born in 1859 to Prussian immigrants living in Louisville, Kentucky. He did not make his home in Atlanta until 1889, when he left his civil engineer’s position with the Central of Georgia Railway to become a contractor and soon after president for forty-three years of his own building materials supply company. Nine years after his arrival in Atlanta, Kriegshaber was able to afford his elegant showplace on the periphery of Inman Park. He served in executive positions for countless businesses, civic, philanthropic, and cultural organizations. In addition to his building material supply business, Kriegshaber was the founder and first president of the Atlanta Terra Cotta Company, a director of the Atlanta Art Glass Co. and vice-president of the National Builders’ Supply Association. He was a director of the Chamber of Commerce and, in 1914, was part of the committee from the Chamber that spearheaded the new development at Lakewood for the Southeastern Fair. The Fair opened in 1916, the same year that Kriegshaber served as president of the Chamber of Commerce.

A charter member of the Rotary Club, Kriegshaber also served as director of the local council of the Boy Scouts of America, as president of the Jewish Charities and of the Jewish Educational Alliance and was director of the Hebrew Orphan’s Home. He was instrumental in establishing the city’s first public playgrounds for children and was later vice-president of the Playground Association of America. In 1905, Kriegshaber was one of the organizers of the Standard Club, serving as its first vice-president.